Phil Neuffer, Managing Editor of the ABF Journal asked DFA President & CEO Manar Morales to share her advice on creating a culture of diversity and inclusivity in the workplace.  The article, Beyond Statements: How to Build and Maintain a More Diverse & Inclusive Workplace appeared in ABF Journal’s Q1 2021 DE&I Issue.

“Organizations need to look beyond mission statements that include diversity and inclusion and make authentic and tangible commitments towards improvement…I advise leaders to peel back the layers and ask, ‘Well, what exactly are we doing to improve?’ We need to see more concrete actions towards creating cultures that support diversity and inclusivity.”

Read the entire article with more insights from Manar and Michael Bush, CEO, Great Place to Work HERE. The ABF Journal is a magazine for Commercial Finance Professionals.

Don’t miss listening to this recent ASAE: Stronger by Association podcast featuring Alliance President & CEO Manar Morales and Charles Moore, Principal of Thrive Street Advisors.  Learn why Manar and Charles predict that we won’t return to work as we did pre-pandemic and hear how we’ll all need to adjust to new norms and adapt to people’s different situations/abilities to be part of the modern workforce in 2021.

LISTEN TO THE EPISODE HERE 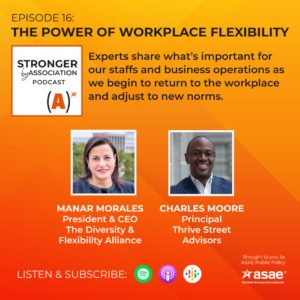 In Case You Missed It… Check out this April 27 article in Bloomberg Law by Meghan Tribe Virus Crisis Could Be Test of Law Firms’ Diversity Efforts. The article advises that law firms continue their focus on diversity and inclusion efforts to avoid the “massive lawyer layoffs and de-equitization of firm attorneys during the Great Recession, which saw an estimated 10,000 lawyers lose their jobs, overall representation of women and minority lawyers in law firms declined between 2009 and 2010.”

The article reinforces that firms need to commit to the retention of diverse attorneys through mentorships, sponsorships, training and other support mechanisms during and after the crisis, and includes a quote from Alliance President & CEO, Manar Morales.

“As law firms make personnel decisions ranging from layoffs to pay cuts, there’s “all eyes on them right now given what happened in 2008.”

During the COVID-19 international pandemic, we are calling on all member and non-member firms and corporations to double down their diversity and inclusion efforts. It’s critical that organizations pay close attention to who’s getting the projects/assignments and who’s not to ensure that diverse individuals are not being adversely impacted by the crisis. Unconscious bias can easily sneak its way into the decision-making process at this unprecedented time.

Learn more from this Law360 article, Pandemic Could Jeopardize Law Firm Diversity Efforts including a quote from Manar Morales, President & CEO of the Alliance: 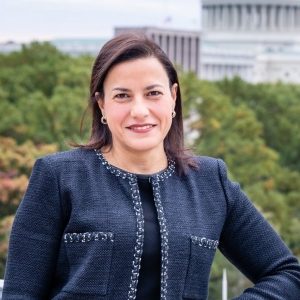 “During difficult times, it is important for law firms to double down on their diversity and inclusion efforts rather than back away from them, emphasizing a commitment to those values.”