Attorneys Promoted to Partnership in the U.S. by Gender – 2019

Roughly 41.3% of attorneys promoted to partnership in 2019 in the U.S. offices of many of the nation’s largest and top-grossing law firms were women, while 58.7% were men.

The average number of attorneys promoted to partnership was 12.6, which represents an increase from last year’s figure of 11. Firms reporting a 50/50 split or greater in favor of women promoted an average of 11.3 attorneys to partner, which represents a significant increase from last year’s figure of 8.3. The seven firms that did not promote any women to partner have significantly smaller than average new partner classes – only 2.3 attorneys. 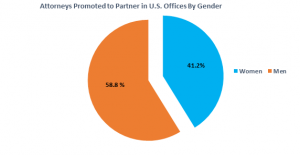 The Bigger Picture of Women in Law Firms

Share of Women Among New Partners: A Six-Year Look

When the Alliance began collecting data in 2012, the share of women among new partner classes was roughly 33%. The percentage of women among new partners in the U.S. has remained relatively stable with modest increases in the past (other than 2013 to 2014 representing a decrease). This year’s figure of 41.3% represents a substantial increase, surpassing the previous mark of 38.9% from last year, and is also coming closer to percentages of women associates (45.9%) and women summer associates (51.4%) over last year’s numbers.[1]

The Diversity & Flexibility Alliance’s New Partner Report is a yearly compilation and examination of data from over 100 of the nation’s largest and top-grossing law firms about the attorneys promoted to partnership in U.S. offices. The Alliance has generated this report since 2012, and the report aims to uncover trends related to the percentages of women promoted to partnership each year.

The data contained in this report is based upon publicly available firm announcements and self-reported sources about annual classes of attorneys promoted to partnership in U.S. offices. For the 2019 report, the data reflects new partner classes with an effective date of promotion between October 1, 2018 and September 30, 2019. This report does not include data from the Alliance’s Law Firm Flexibility Benchmarking Survey Report, which is a separate Alliance research initiative.

The Alliance is here to provide you with expert advice on ways to improve the representation of women partners at your firm – to learn more, contact Manar Morales.

We strive to keep this report accurate, but should you find any inaccuracies or have questions, please contact Sejal Shah. If you would like to join our mailing list and receive a .pdf of the Executive Summary please send you name, title, organization name and email address to sejal@dfalliance.com.

Alliance Members may access the full report in the Member Resource Center.

WANT TO LEARN MORE ABOUT ALLIANCE MEMBERSHIP? LET'S HAVE A CALL!